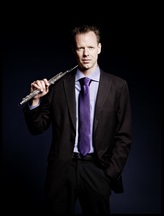 Tim Wintersohl (1979) took his first flute lessons at the age of seven at the music school in Leverkusen, Germany. In 1998 he started studying at the Royal Conservatory of The Hague, The Netherlands, with Rien de Reede, Thies Roorda and Emily Beynon, graduating with the master of music degree in 2006. He also studied with Trevor Wye in Hastingleigh, England.

As a soloist he received a number of awards at international competitions including the Concorso Internazionale Premio Citta’ di Padova (2015)  and the Torneo Internazionale di Musica (2008) in Verona, Italy. In 2016 he was invited for a concert-tour through China together with pianiste Celia García-García, where they performed at venues like the Shenzhen Concert Hall and the Opera House of Guangzhou.​ As a chamber musician and soloist Tim Wintersohl has performed at The International Holland Music Sessions, Holland Festival, North Sea Jazz Festival, De Suite Muziekweek, Orlando Festival and the Steve Reich Festival.

Since 2006 Tim Wintersohl has been a member of the Amsterdam Wind Quintet. With this ensemble he performed for Queen Beatrix of the Netherlands, had several performances in the Royal Concertgebouw of Amsterdam and recorded for several Dutch and German labels. In 2014 the Amsterdam Wind Quintet toured through China where the ensemble performed at venues like the National Centre for the Performing Arts in Beijing and the Chongqing Guotai Arts Center.

As guest-player he worked for a large number of orchestras, including the Noord Nederlands Orkest, Philharmonie Zuidnederland, Het Promenade Orkest, Sinfonieorchester Münster and the Philharmonie Südwestfalen.

Tim Wintersohl is keenly interested in contemporary music. Besides several performances at the IJsbreker in Amsterdam he has played world premieres of works by composers such as Martijn Padding, Jeppe Moulijn and Chen Wagner. He has also worked with Steve Reich and Thomas Adès.

If you want to take a flute lesson and
you don't speak Dutch
that would be no problem.
Tim speaks German, Dutch and English.
LEARN MORE